Sofia is a Mexican telemedicine company that has one of the best user experiences I have used in this niche. This month she announced that she raised $20M in Early Stage Venture from Cavarly Ventures and Index Ventures. With this, the company has raised just over $26M since it was founded in late 2019. But the most important thing is that last November 18th they officially launched their app in Mexico.

Why am I so excited about Sofia? Just use their app to find out. In a country where all basic services are lagging behind (health, food, banking, legal, education, etc.), we depend on the private initiative to provide a better solution. Normally, this would be a point of concern, since it only increases social inequality (e.g., public vs. private education). But companies like GBM+, Albo and Sofia, provide an accessible solution beyond 1 – 10% of the population.

Government as a service Without getting too intense, this is another element of a society that is getting closer and closer to Cyberpunk, the genre of fiction where corporations have more power than governments and privatize the services that the latter should provide. In the next decade we will have governments that will be replaced by corporations that offer better services and quality of life. Governments that understand that every year we are getting closer to a model of Government asa Service.

In December we will launch LatamBase, an interactive database with all the information on Latin American startups. It will cost US$199 per year and will be updated every week. Before making it public we would love to have your feedback. If you want to save $199 and have it free for the first year, just answer the email and we will contact you. So far the database mounted on Airtable contains

-• Facio5,000,000 in seed capital forMonashees Banking, Brazil Facio is a digital platform that facilitates the process of contracting loans for the working class. -• Sofia $19,000,000 in Cavalry Early Stage Venture and Index Ventures Healthcare, Mexico Sofia offers a better way for millions of people to take care of their health through telemedicine -• Quantum Talent2,550,000 in Clout Capital’s Early Stage Venture HR, Peru Quantum Talent is a SaaS startup that offers HR solutions that reduce turnover and increase employee productivity. -• Minery,$550,000 in Seed Capital Mining and Marketplaces, Brazil Minery is a cloud-based marketplace that focuses on trade in mineral products. -• Solfácil – 20,000,000 in Debt Financing Credit and Energy, Brazil Solfácil is the main platform for solar investment in Brazil.

The Future of FoodTech 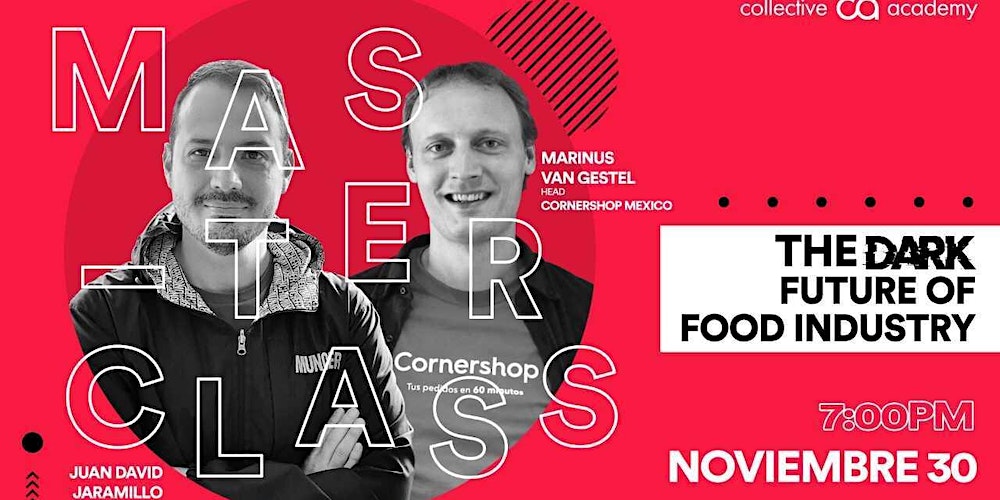 On November 30th we will have a Masterclass on the future of FoodTech.

Juan David Jaramillo, CEO and Co-Founder of MUNCHER and early investor of Rappi will talk about the future of Dark Kitchens

Marinus Van Gestel, Head of Cornershop Mexico (former CMO and CCO of Linio) will speak about the future of Supermarkets.

Good old Jorge Ribs‘ company, which enables messaging apps without connectivity, became known as the default app for demonstrations around the world. This is because it allows you to maintain communications even when oppressive regimes block or “turn off” the internet. Recently, activists in Nigeria and Thailand have urged their supporters to download the application, as they did last year when Hong Kong protesters downloaded Bridgefy to confront government censorship of phone services or data connections. This month, when Turkey and Greece were hit by an earthquake, the application became fashionable in application stores in both regions.

Will opens 5 logistics centers On Thursday, he announced the opening of five logistics centers throughout the southeast of Brazil. The Argentinean e-commerce giant is looking to accommodate a rapid shift to online shopping during the coronavirus pandemic.(link)

Is creating a farm to compete with AWS Leading global cloud providers are aggressively expanding their international businesses by growing their marketing teams and data centers around the world. For example, in recent months, Microsoft has launched a new data center region in Austria, expanded in Brazil and announced that it will build a new region in Taiwan while competing with Amazon Web Services.

Oxio, which has its HQ in NYC, raised $12 million in Series A funds to expand its program in Latin America and the United States in 2021.

Contxto – Costa Rica has a lot to be proud of today. Earlier this week, the Costa Rican…
HyperNoir
Leer más

Rappi 101: A quick review of how the last-minute delivery app got to where it is

Contxto – Pay no heed to what seems to be Rappi’s trudge through the murky waters of controversy.…
HyperNoir
Leer más